NITROX for Nitrox certified divers. Using Dalton’s Law, we can find individual partial pressures easily by multiplying the percentage of the individual gas by the total absolute pressure. PO2 = Ptotal × 21% volume of gasO2. This is particularly important in both recreational and technical diving because oxygen becomes toxic when the PO2 exceeds 1.4 bar/ata. Even air (with 21% O2) has too much oxygen when below 67 meters. The depth at which a mix gets toxic is calculated with formula 14 / PO2– 10 f.e. Nitrox32: 14/32 – 10 = 33,75 meters max depth.

B>    Jacks (Trevally), barracuda, Porgy & Chub. Characteristics: usually silver with forked tails. Some of the largest fish on or near a reef.

D>    Damselfish, Chromis & Hamlets. Characteristics: Small, oval shaped fish dart in and out crevices on the reef. The Indo-Pacific Anemonefish is a damselfish.

E>    Groupers, Seabass & Basslets. Characteristics: Proportionately big body with large mouths & lips. Tend to be solitary and hang out in the shadows. These fish are predators.

G>    Squirrelfish, Bigeyes & Cardinalfish. Characteristics: Nocturnal fish, out on the reef by night and hiding in cracks and crevices by day. Their reddish color and big eyes makes them identify as night adapted fish.

H>    Blennies, Gobies & Jawfish. Characteristics: long bodies and spends time perched in small holes on the bottom. Some gobies live together in a hole with a blind shrimp, making a good example of symbiose. Some types of gobies are cleaners, meaning pick parasites off of other fish.

K>    Moray Eels. Characteristics: fish that looks like a snake. Most species live in holes and crevices, come out tot feed at night.

L>     Sharks & Rays. These is one group because their bodies consist of flexible cartilage and lack much true bone. Sharks swim using their tail like other fish, whereas rays have modified pectoral fins that they use like wings. 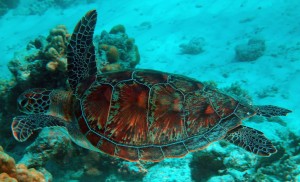 The green turtle is found in scattered areas in both the Andaman and South China Sea coasts, nesting in both areas. They are listed as globally threatened by the World Conservation Union (IUCN) and are protected by International Law (CITES) and Thai Law. Seen occasionally at East of Eden. The Green Turtle is the most typical sea turtle, possessing a teardrop-shaped carapace and a pair of large, paddle-like flippers. Despite the turtle’s common name, it is lightly-colored all around while its carapace’s hues range from olive-brown to black in Eastern Pacific green turtles. The turtle is actually named for the greenish coloration of its fat and flesh.

The Hawksbill Turtle (Eretmochelys imbricata)
Hawksbill turtles are found near off-shore islands in the coastal waters of the Andaman Sea, and the northern Gulf of Thailand. They are listed as “Critically Endangered” in IUCN’s Red List. It is listed in CITES, and is protected by Thai Law. Frequently seen on Breakfast Bend.

The Green and Hawksbill turtles look very similar to each other however they have some differences in appearance. The Hawksbill can be distinguished from the Green Turtle by its sharp, curving beak with prominent cutting edge, and the saw-like appearance of its shell margins.
Diet Unlike other members of the turtle family, the Green turtle is mostly herbivorous. The adults are commonly found in shallow lagoons, feeding mostly on various species of seagrass. Sponges are the principal diet of hawksbills once they enter shallow coastal waters and begin feeding on the bottom. Some of the sponges eaten by Hawksbills are known to be highly toxic and lethal when eaten by other organisms. Hawksbills are also known to feed on other invertebrates, such as comb jellies and jellyfish.
Size The largest Green turtle ever recorded weighed 395 kilograms whilst the Hawksbills are generally smaller with the largest recorded tipping the scales at 127 kilograms.

The Olive Ridley Turtle (Lepidochelys olivacea)
The number of nests on three major nesting beaches has declined dramatically between 1985 and 2002. Olive Ridley’s are listed as “Endangered” by IUCN, and are protected by CITES and Thai Law. Not observed on Similan Islands for many years now. Normal size 60 cm

The Leatherback Turtle (Dermochelys coriacea)
The leatherback is only known to nest on the Andaman Coast. The leatherback has been listed as globally endangered since 1970, and was confirmed as “Critically Endangered in Thailand” in 1996. It is listed in CITES, and is also protected by Thai Law. While not seen on the Similans, they have been observed nesting on several beaches in the area. Maximum size 1.9 m. 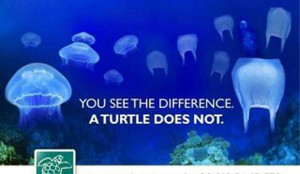 The sea turtle is a reptile which spends all of its life in water. It obviously needs to go to the surface from time to time, to breathe air. Bear in mind they can actually drown if frightened by divers. Also turtle thing plastic backs are jellyfish. If eaten the plastic will hold air in their stomach and cannot submerge to find food and die by starvation.
The natural longevity of the sea turtles is not entirely known, but they grow very slowly taking about 15 years to reach maturity.The sea turtle’s diet includes sponges, marine worms, corals and even jellyfish
The distribution of turtles in Thai waters is spread out along the fine sand quiet beaches of the coastline and islands in the Gulf of Thailand and the Andaman Sea. These two geographical areas also reflect different nesting times of the turtles.
In the Gulf of Thailand the most important nesting areas for green and hawksbill turtles are Khram and adjacent islands which are located in the inner Gulf, Chonburi Province. There are some islands along the east coast from Chonburi, Rayong and Trat Province and some islands in the middle Gulf of Chumphon and Surat Thani Province where sea turtles are occasionally found. In the Gulf areas, green and hawksbill turtles lay their eggs all year round with the peak from May to August.
In the Andaman Sea coastal areas of Thailand, the main nesting areas are north-west coast of Phuket, and Phang Nga provinces. In particular these areas include Thai Muang Beach and Phrathong Island, Maikhao beach Phuket, Tarutao Island and Adang-Rawi Islands of Satun Province . Olive ridley and (occasionally) Leatherback turtles are found in these areas. The green and hawksbill are found at the Similan Islands, Surin Islands and Tarutao Islands. The nesting season of sea turtles in the Andaman Sea region occurs only from October to March with a peak from mid-November to mid-January.

The females come ashore after dusk, but they have been observed nesting until just before dawn. They select their nesting site and dig a small pit 18 inches deep using their rear flippers. A clutch of between 40 to 180 eggs will be laid, after which the pit will be carefully concealed by sand before they return to the sea. The whole process usually takes about one hour. During the egg laying, the eyes of the turtle will be covered by a colorless mucus to prevent dehydration and keep out the sand grains.
After an incubation period of 60 days, the hatchlings dig their way up to the surface of the pit, usually at night when the sand is cooler. Hatchlings locate the water’s edge by orienting themselves to the horizon, but distant house lights can disorient the youngsters so that they actually crawl away from the sea.
Turtles are most commonly seen in shallow reefs on similan dive sites such as East of Eden or Breakfast Bend but you may see them deeper on rocky sites such as Elephant Head Rock or Deep Six. The usual sightings are Hawksbill and Green turtles.
At Thai Muang (National Park) beach, Leatherback and Olive Ridley are often seen nesting. There is an annual 7 day event here, usually during the first week of March, to release young turtle hatchlings, which have been raised by the Fisheries Department, back into the sea. 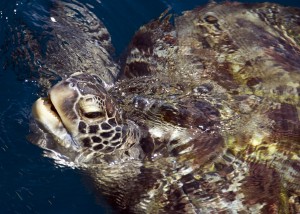 THREATS TO MARINE TURTLES IN THAILAND

Sea turtles have lived on this planet for 130 million years, but egg poaching, habitat degradation, pollution, and over-fishing threaten to make them extinct.
The main threats to turtles in Thailand can be summarized as follows:
* Threats to marine turtles from fisheries
* Entanglement (mostly accidental) and drowning in long-line fisheries and shrimp trawling nets
* Much of both the coastal and open seas areas used by turtles is also used by fishermen. Because of this, each year, many turtles are killed (often unintentionally) by entanglement in fishing gear and drowning. Some injured and exhausted turtles are released from nets before they die, but their subsequent fate is uncertain.
* Threats to marine turtles from consumption and trade
* Turtle eggs are also easy to collect, and highly nutritious. In some cultures they are also suggested to have aphrodisiac properties. Turtles have also been hunted for their shells that are used for ornaments, sunglasses and in jewelery. Their hides are cured for leather. In Asia, there has been a long tradition of consuming turtle flesh and eggs for thousands of years. Historically turtle shell has also been traded in the region for hundreds of years.
* Threats to marine turtles from coastal development
* The construction of seawalls, hotels, marinas, and other infrastructure associated with coastal tourism and commerce, have destroyed large areas of turtle nesting beaches around the world.
* Disruptive activities on or near nesting beaches during nesting season, such as activity, noise, lights, etc.
* Turtle reproductive behavior evolved in an environment of deserted, intact beaches. Nowadays, light and noise pollution frequently deter or interrupt many females from successful laying. Hatchlings locate the water’s edge by orienting themselves to the horizon, but house and street lights can disorient newly hatched turtles so that they actually crawl away from the sea.
* Pollution of the oceans, including chemical contamination
* The ingestion of plastic bags and other garbage