Phuket offers an array of local savories that are distinctly different.

Dim Sum means made with the heart are delicate small one bite servings. They are mostly steamed pork, seafood or vegetables for only 10-15thb.

Haw Mok This is a spicy crab or fish mousse cake steamed and served in a banana leaf. It is a great complement to any meal especially Kanom Jin.

Hokkian Noodles These yellow noodles are great when stir-fried with soy sauce.

Mee Sua is a yellow noodle dish and favorite breakfast for locals. It is often consumed with congee or rice soup.

Oh Tao (fried oysters) is similar to Hoi Tod (fried mussels) in flour paste. The oysters are mixed with flour, taro and eggs.

Pan Sip Sai Pla is a Steamed Thai-Style Fish Dumpling. First they steam (the snapper) fish and then they separate the fish meat from the rest of the fish. Then, they put ingredients like chopped galangal, koriander root, onions, garlic inside a wok and fry it over a low flame until it’s slightly brownish. Then they add palm sugar and fish sauce into the wok and keep on stirring it until the palm sugar melted, and finally they mix it with the steamed fish meat. It’s all wrapped into a dough that is made from flour, salt, egg and sugar, and that thing is then fried one more time.

Cashew Nuts are a major product of Phuket. Cashew nut trees are largely grown both in Phuket and the surrounding provinces.

Phukets’ Pineapples are sweet and crunchy in texture, quite different than other types of pineapples. 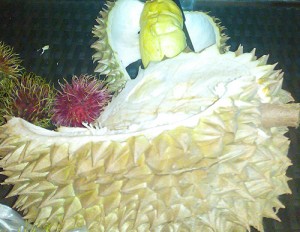 Durian The controversial King of Fruits. Durian is the second largest fruits of the world. Only jack-fruit and breadfruit appear bigger. The fruit has numerous hard big spikes on the outside and smells very strongly. Inside their is pulp surrounding several pits. If the pulp is light yellow, it is just right to eat. If it is white, the flesh is hardened and tasteless. If it looks wet and soft it is overripe and tastes bitter.

In Thailand durian trees are mostly grown in the southern and eastern provinces. It takes about -depending on the species of the durian tree- four to over six years for a newly planted durian tree to begin to bear fruit. There are different kind of durian with different degrees of sweetness and smell. Beginners are advised to try kanyao which means “long stem”. It is weaker in smell and richter in taste. Other varieties include chani, kop or kampan. Kanyao is widely considered the most delicious of all varieties but also by far the most expensive one. The second best choice is monthong or “golden pillow”. It is almost odourless but has thick and tender pulp that taste delicious. 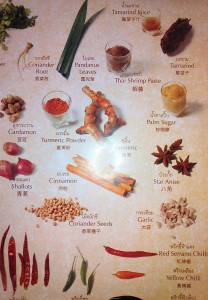 Turmeric Once a symbol of prosperity in India turmeric has been used in the subcontinent and all around Asia over the past 2,500 years for cooking, cleansing and healing. It harbors anti-platelet activity, which means that it reduces the ability of the blood to clot. It is said that turmeric has anti-inflammatory properties, antiseptic, antibacterial and antioxidant qualities. It is also known to detoxify the liver.

Lemongrass Closely related to citronella, this plant is known to detoxify the liver, pancreas, kidney, bladder and digestive tract. It is good fro stemming cholesterol an uric aced. It stimulates digestion and blood circulation. It is said to improve skin en even tone muscles. Recent studies have shown lemongrass contains a high amount of beta-carotene. 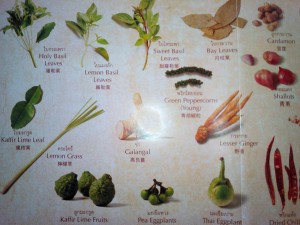 Coconut are known to quickly and efficiently restore your body’s fluids when dehydrated. Also it detoxify your body and boost your immune system. Its potent healing qualities can be attributed, in part, to its high potassium content (which is said to be higher than most sports drinks, while far lower in sodium and sugars). It is also nearly identical in composition to human blood plasma. For this reason, it is sometimes used for emergency blood transfusions.

Lotus The tea made for the lotus plant is a delicious green tea that is native to Vietnam and India. The lotus has been associated with purity and serenity in Hindu and Buddhist literature and is a staple in ayurvedic (sangkrit meaning the complete knowledge of long life) detoxification. It is known for its cooling properties. the tea helps dissolve and eliminate mucus and lung congestion.

Pandan Leaves with its dark green color and strong nutty aroma, pandan is a prominent feature in cooking. It is especially versatile and known to enhance both spice and sweet food recipes. The plant is known as a diuretic and is useful for healing wounds, relieving pain and treating skin disorders.

Ginseng is shaped like a person. It has been used in traditional Chinese medicine for thousands of years. Known to increase energy and reduce fatique, as well as treat stress, increase levels of alertness and clarity, and improve memory. Ginseng is sometimes seen as a wonder root. Ginseng contains elements that appear to have a strong effect on the adrenal glands, whick secrete hormones that are used to ward off physical and emotional stress.

Bael fruit is often sold in sun dried slices. Its leaves and shoots are often eaten as a vegetable in Thailand and used as spice in Indonesia. All parts of the plant can be used to promote good health, including the stem, the bark, the root, leaves and the fruit. It is good for the digestive system and the ripe fruit is known to be the best of all laxatives, cleaning and toning up the intestines in the process. Its juice, when mixed with honey, can relieve fever.