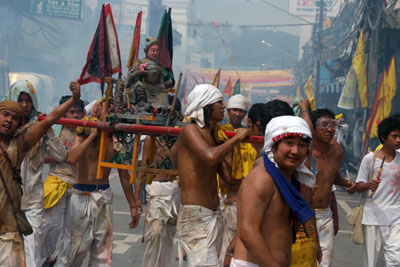 Beware of your stomach both because you might not be used to eat only vegetables and the thoughts of what the devotees do might turn your stomach around. See for more info about vegetarianism. If you want to see images of the vegetarian festival Phuket catching the soul of the moment Mpathy.nl. If you are interested in the program send us an inquiry. We will be happy to send the full program.

Phuket’s Vegetarian festival (or jia chai in local Hokkien Chinese dialect) began in 1825, when the govenor of Thalang, Praya Jerm, moved the island’s principal town from Ta Reua in Thalang District to Get-Hoe in Kathu District, where were tin mines and Chinese miners. Kathu was then still covered by jungle and fever was rife. It happened that a traveling opera company (called ngiu in Thai or pua-hee in Hokkien dialect) came from China to perform for the miners.

When the whole company grew sick from an unnamed malady, they kept to a vegetarian diet to honor two of the emperor gods, Kiew Ong Tai Teh and Yok Ong Sone Teh. The sickness afflicting the opera troupe then disappeared. This greatly interested the people of Kathu, who asked how it was done. The answer came that ritual vegetarianism with its attendant ceremonies had been the cause. The aim of the festival is to bring good luck to individuals as well as to the community.

It happened later that one familiar with the festival volunteered to return to Kangsai, China. This person invited the sacred Hieuw-hoy or Hiew-ean (incense smoke) and Lian Tui (name plagues) which have the status of gods, to come to stay in Kathu. He also brought holy writings  used in the ceremonies. Returning on the seventh night of the ninth month. The people, upon hearing of his arrival  went in procession to Bang Neow Pier to escort him and his sacred cargo back. This is the originn of the processions that figure in the festival.

BUDDHISM
“All meats eaten by living beings are of their own relatives.” Lunkavatara Sutra (Tripitaka no. 671)

“Also, after the birth of the baby, care must be exercised not to kill any animal in order to feed the mother with meaty delicacies and not to assemble many relatives to drink liquor or to eat meat…because at the difficult time of birth these are innumerable evil demons, monsters and goblins who want to consume the smelly blood… by ignorantly and adversely resorting to the killing of animals to the detriment of both mother and baby” Ksitigarbha Sutra (Chapter 8 )

“Be careful during the days immediately after someone’s death, not killing or destroying or creating evil karma by worshipping of offering sacrifice to demons of deities…because such killing and slaughtering committed or such worship performed or such sacrifice offered would not have even an iota of force to benefit the dead, but would entwine even more sinful karma into previous karma (retribution), making it even deeper and more serious… thus, delay his rebirth to a good state.” Ksitigarbha Sutra (Chapter 7)

TIBETAN BUDDHISM
“The offering to the deities of meat obtained by killing animate beings is like offering a mother the flesh of her own child; and this is a grievous failure.” The Supreme Path of Discipleship: The Precepts of the Gurus, The Thirteen Grievous Failures, Great Guru Gampopa

TAOISM
“Do not go into the mountain to catch birds in nets, nor to the water to poison fishes and minnows. Do not butcher the ox that plows your field” Tract of the Quiet Way

SIKHISM
“Those mortals who consume marijuana, flesh and wine – no matter what pelgrimages, fasts and rituals they follow, they will all go to hell” Guru Granth Sahib, page 1377

JAINISM
“A true monk should not accept such food and drink as has been especially prepared for him involving the slaughter of living beings. Sutrakritanga

CAO DAI
” …The most important thing is to stop killing…because animals also have souls and understanding like humans… If we kill and eat them, then we owe them a blood debt.” Teaching of the Saints, About Keeping the Ten Precepts – Abstaining from Killing, section 2